In November, we were invited by Azores Airlines to visit the beautiful island of São Miguel. Devoted To You spent a few days travelling around the island and taking in all of the natural beauty. Here’s a recap of our visit on the island! 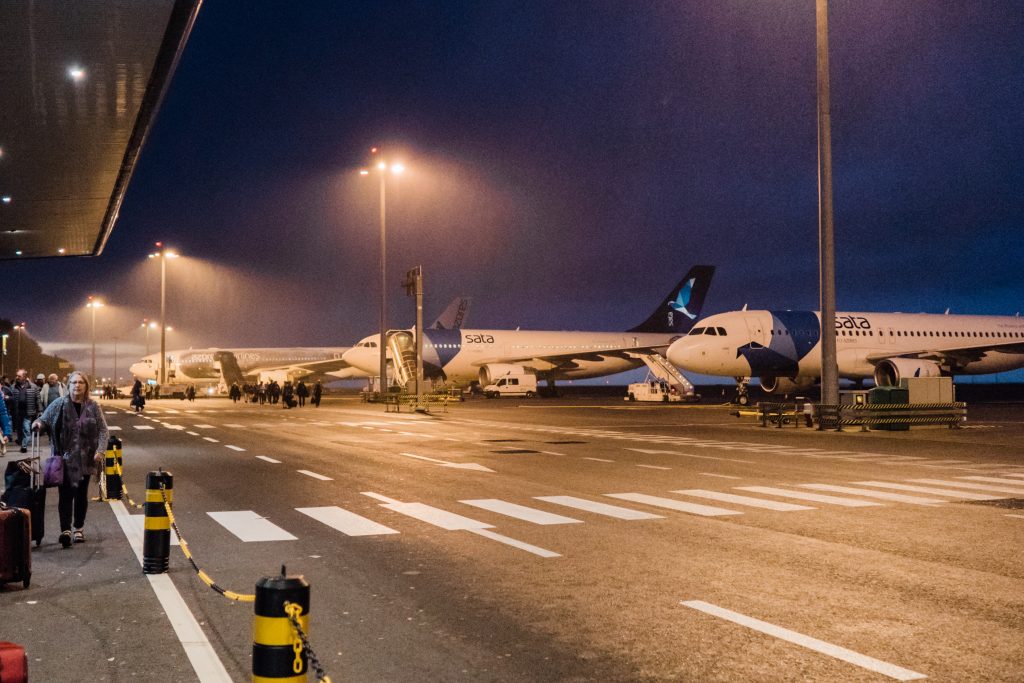 São Miguel is the biggest island of the Azores, which is an archipelago made up of nine islands. The Azores is located in the North Atlantic Ocean, between North America and Europe, and is part of Portugal.

Due to its position in the middle of the Atlantic Ocean, São Miguel has an interesting climate that ultimately leaves it beautifully green all year. São Miguel is actually known as the green island, which becomes obvious as soon as you land and see nothing but healthy plant life covering the island. It is the perfect location for engagement photoshoot, elopement and honeymoon.  There are a lot to do and so much to experience on the island, from hiking, biking to water activities like sailing.

I took the red eye direct from Toronto Pearson International, and it’s surprising how close the Azores really are. The flight was only 5.5 hours! There is a time zone change of 4 hours (depending on daylight savings time), so even though our flight left around 9pm Toronto time, we arrived around 7am local time. We were able to rest up a bit at the Azor Hotel before heading out to site see for the day.

The Azor hotel is new to the island. It opened about a year ago.

We stayed at the Azor Hotel for the duration of our trip. It’s conveniently located close to restaurants and has a small casino for entertainment. It’s also close the Ponta Delgada airport and right at the Ponta Delgada Harbour. The views from the rooms were of the harbour.

We enjoyed breakfast there each morning, which was a buffet with fresh fruit, crepes, omelettes and local Azorean cheese and bread. We also had dinner there, and they had options for all taste buds (including vegetarians!) A favourite of our group was the lemon dessert – a must try while you’re there!

After resting up, we had lunch at a local restaurant in Ponta Delgada. Azoreans eat a lot of fish, and have plenty of variety.

After lunch, we went site seeing to different areas on the east side of the island. Ribeira Chã is a rocky beach that would make a great photo op.

In the summer, there’s also a natural pool in the ocean, close to Vila Franca, that would make a great day trip. There are ferries that run all day to the swimming spot, and locals say the water is warm and calm, as it’s protected from the harsher waves.

To end the site seeing portion of the day, we visited Terra Nostra in Furnas. Terra Nostra is a preserved park with natural hot spring fed pools and a villa. Terra Nostra would make a perfect photo shoot location, as the colours of the surroundings are stark but vast, and the gardens are great backdrops.

Terra Nostra Park is located in the town of Furnas, which is home to the hot springs. The hot springs are used for many things on the island, including energy and food. They also feed into the Furnas Spa, which we got to walk through next.

After site seeing for the day, we enjoyed dinner at a restaurant in Ponta Delgada called Cais Da Sardinha. Cais Da Sardinha is built on the harbour and has views of the water front.

All photos captured by Rhythm Photography

Stay tuned to our adventure part 2!