Is the Ontario Government Shredding Your Marriage License Applications?

Over the past few days newlyweds have been set on a wild ride of emotions as to the status of their recent marriage.

According to an online source, officiants received a notice in December 2015 that they should not mail in completed marriage license applications with the prepaid envelopes provided to them anymore. Failure to do so will result in the government not recognizing the marriage as the documents received in said postage-paid envelopes are to be shredded. 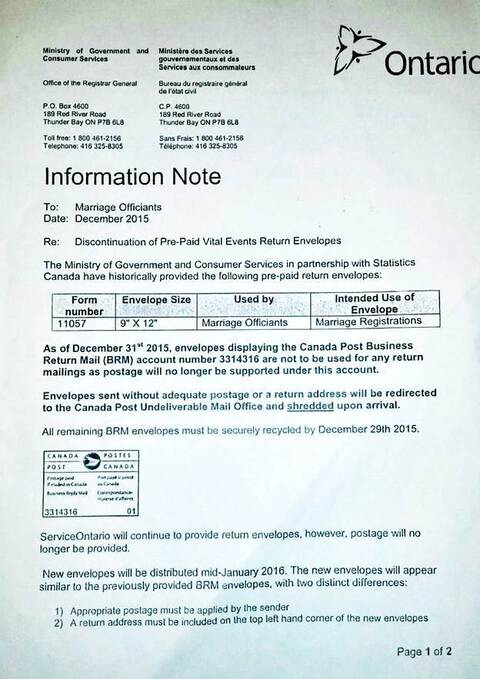 I can imagine the nervousness couples may feel after seeing this. Obviously something is missing here. So we took the liberty to head on over to our nearest town civic centre to look into it further.

So is the government going to shred your marriage license application?

The answer is NO.

So basically the story is this – historically Statistics Canada paid for the postage-paid envelopes and will no longer do so as of January 1, 2016. So based on the original document above, all existing postage-paid envelopes will not be valid and will be shredded on arrival. As such, officiants need to use the new ones provided to them which will clearly ask them to affix the correct postage.

The Ministry of Government and Consumer Services really dropped the ball on this one. In an amended notice delivered to officiants in January 2016, it will NOT shred marriage license applications when received in the previous postage-paid envelopes and will continue to honour all existing postage paid envelopes until December 31, 2016, but officiants are urged to use the new envelopes instead.

We have taken the liberty of scanning the new document here: 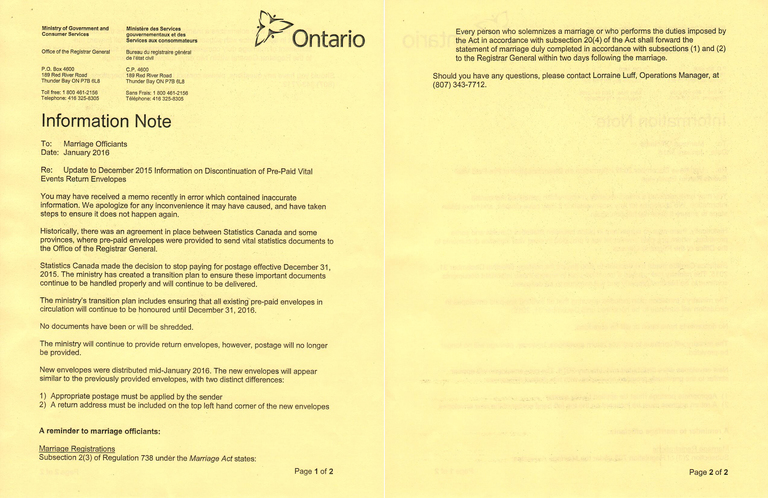 If you just got married or are looking to over the course of this year, we suggest you urge your officiant to use the new envelopes instead. Given the cost of your wedding, what’s a few dollars more of postage?