The WedLuxe Wedding Show in 2012 was a one-of-a-kind indulgence for the senses when it was showcased back in January at the Ritz-Carlton.

To say that the show was extravagant is truly an understatement. From the rose tunnel entrance to the Kate Spade inspired tea salon, the show spared no cost to ensure it made its mark in the wedding show industry. For brides and wedding professionals alike, it was a feast for the eyes and gave those looking for wedding ideas much to yearn for. Now in its sophomore year, WedLuxe will up the ante and host the 2013 WedLuxe Wedding Show in the iconic Fairmont Royal York Hotel. If it’s anything like its debut, we’re going to see even grander booths from WedLuxe’s vendors. We heard the tea theme this year will be inspired by F. Scott Fitzgerald’s The Great Gatsby. Sounds like a great lead in to the movie adaptation that’s coming out in May! 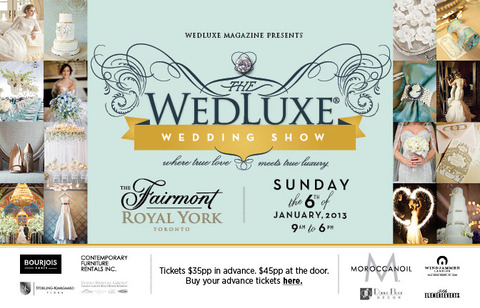 The WedLuxe Wedding Show will be held on Sunday January 6th 2013 and tickets are already on sale online at Eventbrite for a discount. Click on the image above to pre-purchase your tickets for $35 (+ HST) per person. If you want to buy your ticket there, it will be $45 at the door. The show runs one day only from 9am to 6pm, and given the traffic the show generated last year, we suggest you get there sooner rather than later – there’s lots to see and being there earlier gives you a chance to converse with some of the vendors before the crowd sets in.

If you’re looking for some show highlights to tie you in till January, take a look at some of the photos we took at the show earlier this year:

Hope to see you there!